I was introduced to Chris Saxman, the COO of CirrusMD, when he moved to Denver several years ago. A mutual friend had suggested that we connect, given that Chris had a background in healthcare and investment, and I was the co-founder of a digital health startup.

When we sat down together for coffee at a café in the Highlands, I was impressed by his commitment to re-imagining healthcare, and by his openness to collaborating with others to achieve that goal.

It only made sense that a short time after our conversation, Chris would go on to join CirrusMD!

CirrusMD is a Colorado-based telemedicine company that’s leading the nation in using digital health technology to enhance healthcare at the community level. Unlike other telemedicine providers, which connect patients with doctors who live halfway across the country, CirrusMD links its users to local physicians who can follow up with them when needed and refer them to specialists who practice nearby.

“We do data integrations,” Andy Altorfer, the CEO of CirrusMD, explained during a recent presentation, “so the doctors staffing our services can access our users’ medical records. Each encounter between a doctor and a patient on CirrusMD is transmitted to that patient’s medical record, and their primary care docs or care managers are notified when a virtual encounter occurs.”

Since 2013, CirrusMD has been allowing patients to call, text-message, and video chat with local physicians around the nation. In that time, the company has accumulated over a quarter of a million users, making it one of the largest telemedicine providers in the US!

As you might expect, an amazing company like CirrusMD has an incredible team to thank for its remarkable growth. The experienced entrepreneurs, physicians, and technologists at its heart are responsible for the community-based model of continuous care that’s driving CirrusMD’s phenomenal success.

And the best part? This extraordinary team is going to be a part of Catalyst HTI! 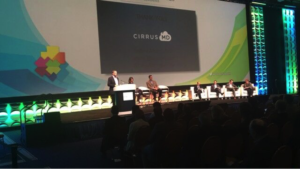 “CirrusMD has been a long-time supporter of the Catalyst HTI concept and became one of the first members of Mike Biselli’s healthcare innovation community back in June 2014,” Andy Altorfer said in a statement. “We have already realized considerable and very tangible value from the community through serendipitous meetings with senior executives of major healthcare organizations, collaboration with our peer digital healthcare startups and significant PR benefits – to name just a few.”

“We are eager to see how this community of companies grows over the next two years and are excited to move into our new home on Brighton Boulevard!”